Succession -Searching For a Landing Point That Is Just Right

The second part of the Kawashima Textile School (KTS) Tsuzure-Ori series is an interview with Hirokazu Kondo, who specializes in tsuzure-ori. We talked about his encounter with KTS, with succession in mind, his days as a student devoting himself to weaving tsuzure-ori obi, his internship at Kawashima Selkon Textiles, his attitude toward teaching tsuzure-ori, and thoughts on weaving now.

His family runs a kimono store. Kondo sensei says that the path of succeeding the family business came into view shortly before graduating from high school, when he thought about his future. His grandfather opened the store in Aichi prefecture. He says that the feeling of "wanting to continue the store if possible," grew naturally as he watched his family members continue to run the store, in a town where wearing kimono is not a part of daily life. He came to KTS upon seeing an advertisement in a kimono magazine. The Professional Course for 2006 was already full, so he entered after waiting a year, while taking a drawing class.

He became drawn to tsuzure-ori in a critique in his first year. He "felt a spark" when he saw a tsuzure-ori obi made by a senior. He had made a tsuzure-ori tapestry in class, but felt a special attraction to the delicacy and beauty of the tsuzure-ori obi. He remembered that Kawashima Selkon Textiles, which founded KTS, also specialized in tsuzure-ori. He found the significance of studying tsuzure-ori at the school, proceeded to the second year, and set his mind to weaving tsuzure-ori obi.

 ◆ The rhythm of moving the hands and feet are different 

In the second year, he practiced tsuzure-ori techniques such as muji-ori (plain weave, in which there is no pattern and the weft travels across the entire width) which is said to be “difficult,” worked on his own pieces, familiarizing himself with the sense of his hands when weaving fine tsuzure-ori, and in the third year, experienced an internship in the Production Department’s Tsuzure Office at Kawashima Selkon Textiles. “At the production site, people act with productivity as well as quality in mind. I learned from seeing the efficient ’actions,’ such as how precise the ratio was when weaving a circle, how the craftspeople’s hands and legs moved differently whether they were weaving the ground or pattern, tips for weaving in the weft neatly, and getting advice from the craftspeople there.” The tempo of weaving with an accurate and constant rhythm, is unique to the production site. “The sound of weaving is also characteristic, so for tsuzure-obi, the rhythm for beating is ‘throw, beat, throw, beat,‘ and you beat only once, so the sound is stronger and louder.“ He then incorporated the skills he learned through physical experience into his work at the school.

He studied for another year, and went on an internship again. This time, he learned how to create designs, from an in-house designer at the Traditional Fashion and Accessories Development Group, and trained to draw smooth lines suited for each motif. At the same time, at school he wove a marble pattern that he designed himself, in a tsuzure-obi, and deepened his own expression skills.

 ◆ A landing point that is just right, to preserve weaving 

Four years of devoting himself to tsuzure-ori. When he graduated in 2011, KTS was approaching the time of succession to a younger generation. He became a full-time teacher, hired in recognition of his skills and attitude pursuing tsuzure-ori. He has been in charge of tsuzure-ori classes in general, including the Professional Course, workshops, and workshops for overseas groups. In 2012, he was involved in the restoration of the "Chōjū Monyō Jinbaori [bird and beast pattern battle surcoat]" (Important Cultural Property), which is said to have been used by Toyotomi Hideyoshi (1537-1598), and was responsible for weaving the base using a technique called "shokusei," which is a type of tsuzure-ori.

What he keeps in mind when teaching is “That there is an accumulation of history, as Tsuzure-ori is a traditional skill of Kawashima Textiles, and has been taught from the opening of the school. To be aware of passing on the skills that have been inherited, and to teach the basics correctly.” He also has these thoughts. “I have only been a teacher for 10 years. Even as a weaver, learning never ends. In the traditional world, it is said that it takes many years to become full-fledged. But for those who want to take their first step, emphasizing the time it takes raises the bar, and could limit the scope, and I feel that would be a shame. When I look at the students, I see that they have ideas that come to them precisely because they don’t know weaving very deeply, and that they have fresh eyes that can take away fixed ideas, which some can easily get caught up with. If there is something they want to do, I want to help them with my knowledge, and support them to take on the challenge. In addition to that, the students from the overseas workshop group often use freestyle methods, even though it is the same tsuzure, and I feel their tsuzure-ori is for enjoying weaving. Their taste in colors and designs are very free, which inspires me, too.

"My feelings about preserving weaving grew stronger through my time teaching at KTS. I feel that way looking at my family, the school, and the textile industry. I want to convey the goodness of things that are made with time and care, and I want many people to take on weaving. What can I do for that to happen? As a teacher I want to respect the tradition, and at the same time broaden the scope and become an opportunity to ask, or start, without reserve. Every day I am searching for a landing point that is just right." says Kondo sensei.


 -What does weaving mean to you?
"To straighten up*" 

"When I sit at the loom, I feel the need to straighten up. If my heart is not at peace, I cannot face weaving, so I need to prepare myself. When I concentrate, I can immerse myself in a state of nothingness, which is also similar to how I feel when I am weeding (laughs). In both cases, I enjoy the time being immersed in it and just moving my hands. The reality is that it is difficult to make time for such things in our modern, busy, daily lives. That is why that time means so much to me."

*Eri wo tadasu = straighten one’s collar. An idiom derived from an account in Shiji, or Records of the Grand Historian

About the School: Tsuzure-Ori Series 1 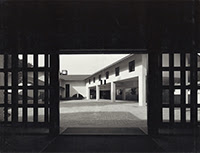